Snakes are reptiles found in just about every part of the world living in deserts, forested regions, marshes, grasslands, and even bodies of water. Most snakes people encounter are harmless or considered beneficial because they feed on other common pests, including insects, amphibians, and small mammals like rodents. However, some snakes are venomous and put both humans and household pets in danger simply by being present. 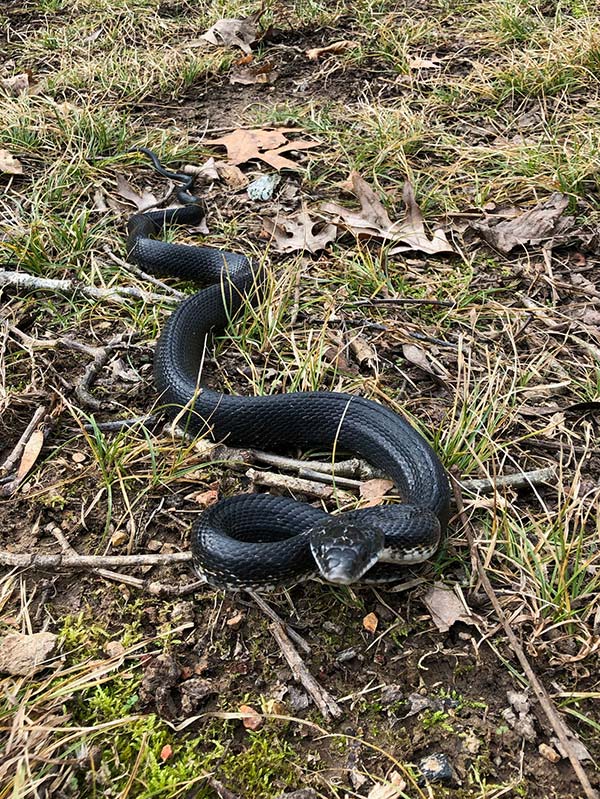 Varying in size and color depending on the species, snakes found in the United States grow an average length of 3 feet (1 m) and may appear uniform in color or display patterns along their bodies. Common snake colors include black, green, brown, red, yellow, and orange. Venomous snakes, like rattlesnakes, cottonmouths, and copperheads, tend to have spade-shaped heads and elliptical pupils while nonvenomous snakes have rounded pupils and narrower heads. They are covered in scales that are leathery to the touch.

Snakes are cold-blooded creatures that need consistent sunlight in order to regulate their internal temperatures. As such, areas that experience extreme cold are inhabitable. Favored snake habitats include deserts, rocky terrain, forested regions, prairies, near ponds, around streams, and in close proximity to lakes.

Are snakes known to enter homes or yards?
When shelter and sources of food are scarce in their natural habitat, snakes enter homes and yards much more frequently. They can invade houses through cracks in building foundations, tears in window and door screens, and even through holes that serve electrical conduits and plumbing. Tall grasses in unkempt lawns provide snakes with ideal hiding and hunting grounds while stacks of firewood, brush, and junk piles offer the reptiles suitable shelter.

Do snakes harm people or property?
Most snakes are relatively harmless and actually flee from human interaction. When cornered, snakes hiss, coil, and either strike or bluff at offending parties. Though this can be frightening to experience, especially for young children and curious pets, no harm is typically caused. Nonvenomous snake bites are painful, but leave no lasting effects. In areas where venomous snakes live, approaching the reptiles is much more dangerous. Their bites can prove deadly if not treated immediately and properly.

Various methods of exclusion help reduce the possibility of encountering snakes in residential zones. Seal any holes on the exterior of buildings large enough for snakes to get through. Cut back tall grasses and weeds and keep wood piles far enough away from homes to eliminate hiding places. In addition, property owners can make modifications to eliminate prey species that attract snakes to the area.

Even though certain species of snakes are not venomous, all snakes have the capacity to harm both humans and domestic animals. They strike when cornered, which makes attempts to trap them dangerous. Critter Control of SW Missouri wildlife specialists can safely and humanely remove problematic snakes from properties. Our professionals are trained, equipped, and ready to keep members of the public safe by eliminating pestilential snakes.

We can help you get rid of snake problems.  Call today!

Request a Quote
Snakes
Snakes in your home, garden or rock piles? Those slithering serpents are probably harmless. Critter Control can help you deal with snakes in a humane and rational way. If you see a snake and are concerned, call Critter Control and our trained technicians can oftentimes catch the snake if it is still there.
Call For A Fast & FREE Phone Estimate Today
417.815.4476
(No Cats & Dogs)